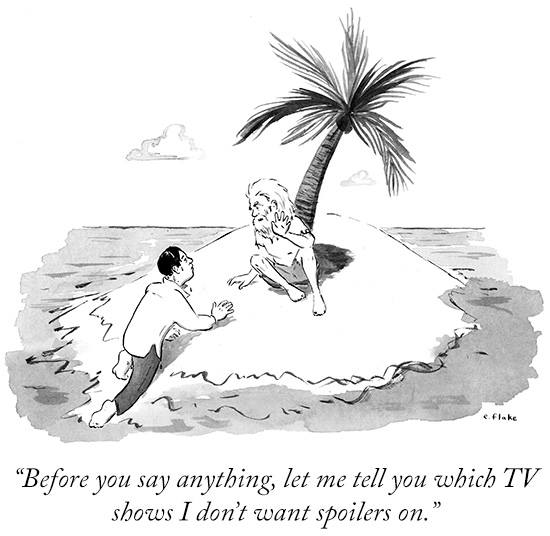 Roger Ebert rightfully noted: “The characters in movies do not always do what we would do. Sometimes they make choices that offend us. That is their right. It is our right to disagree with them. It is not our right, however, to destroy for others the experience of being as surprised by those choices as we were.“

If you have any experience with movie goers you know how personal the issue with spoilers has become.

-“Oh! are you telling me plot details of something i didn’t watch yet? Why!?
You should stop doing that. Right now!”  is a perfectly acceptable response nowadays.

I will advocate there is no such thing as a “Spoiler” or that at least- the phenomenon is enormously exaggerated.
So what defines a spoiler?

1. A spoiler is an element of a disseminated summary or description of any piece of fiction that reveals any plot elements which threaten to give away important details.
2. Typically, the details of the conclusion of the plot, including the climax and ending, are especially regarded as spoiler material.
3. It can also be used to refer to any piece of information regarding any part of a given media that a potential consumer would not want to know beforehand.

“Spoiling” has become a crucial part of modern social etiquette.
But the vague, generalized definitions bare some implications.
Being “Spoiler-protective” to me is an indication of the following:

In short, over-protective spoiler-aware people usually lack a creative essence in their life, or are conformists, but in any case there’s a typical unawareness to what a story IS;

Any story you will ever find is based in a few hierarchic rules:

Some complex story may allow more than one narrative, like the most mysterious episode of the South Park Series- “Freemium Isn’t Free”.

Unsatisfied with the pseudo-educationa reviews on YouTube? This site will elevate the schemes, plots and manipulation you undergo daily. Making YOU more aware and sophisticated in your approach to cinema, videogames and media in general. View more posts