If you’ve been affected by any of the issues you’ve seen in Hellblade: Senua’s Sacrifice and want to talk to someone or find out more;
http://hellbladehelp.info

Pheeew… What a shaking experience this was.

I just happened to notice the original announcement of the single title “Hellblade” (no suffix) going back to 2015.
At that time the studio was much less concerned with mental health issues as part of gaming experience.
First, why you should have heard about that project in the first place;

In short- HELLBLADE: SENUA’S SACRIFICE is the first video game ever to let the player experience the symptoms of a psychosis.
Let me mention here and now that this is not for the kind of person who couldn’t take intense mental stress, impressible, sensitive, and other easily unnerved persons.

The game is short, and most people complete the story under eight hours of gameplay.
It is best played with Hi-Fi audio earphones. I managed with my Amazon Tap loudspeaker. Oh my god.

Both are personal favorites for their unforgettable gameplay, astonishing conceptual design and of course- a pioneering in the motion-capture industry of gaming.
The new title only proves the rule by which NTS are advancing.

“After DmC: Devil May Cry we took a step back and saw that the games space had evolved into two distinct markets,” says Ninja Theory’s product development manager, Dominic Matthews.
“On one side, there are the big blockbuster AAA titles that push production values, are created by teams of hundreds of developers, have big feature lists and are designed to appeal to mass audiences of millions. This is the space where genre diversity and creative risk taking is squeezed in aid of hitting the big sales targets needed to justify the big development costs, where only a small number of genres can now survive.

“At the other end of the market are indie games where new genres are being created regularly, creativity thrives and small teams can make games on a budget for niche audiences. But in the indie space the highest production values are often out of reach given the development resources and budget available.”

Hellblade: Senua’s Psychosis, a short documentary film included with the game, details the concept behind its story and inspirations, notably the team’s study of mental illness. It was written and narrated by Antoniades, and edited by Juergens.

And here are the development series: 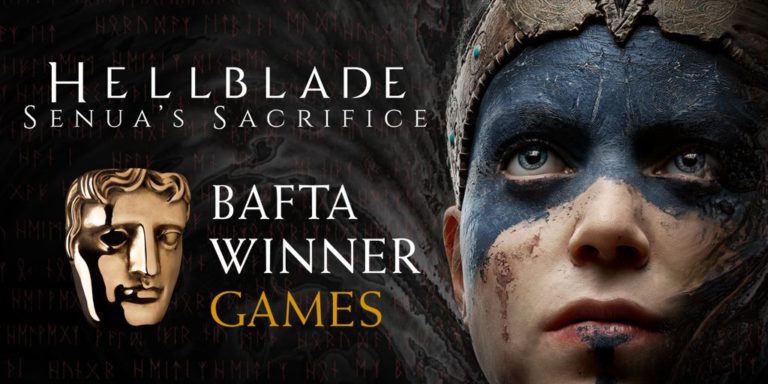 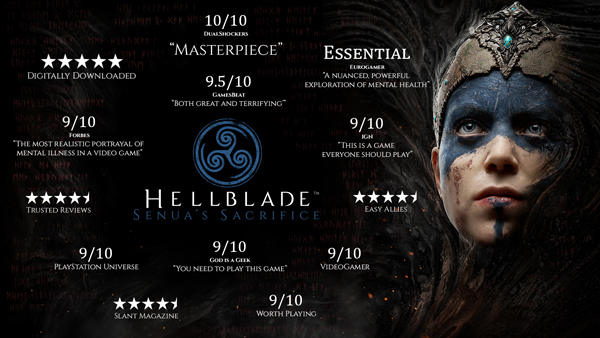 My own thoughts on the matter; “Spoilers” ahead:

-“To understand the story better:
Senua and her mother struggled with severe mental illness (hallucinations, schizophrenia, voice hearing). Senua’s father didn’t know how to handle them and since the story is based on Celtic legends where these kind of illnesses were seen as a curse because they turned away from the Gods.
Zynbel (the father) thought that his daughter and wife are cursed so he tortured them in the name of the Gods, to “cure” them (we can see a couple of these memories at the Trials where Senua relives the things that her father did with her). Meanwhile in the tribe an infection starts to kill the people and of curse they blame the cursed ones for it. Zynbel sacrifices his wife to the Gods hoping that it will save them (we also see this in the game).
Senua was kept in their house most of the time but she escaped a couple of times and during one of the escapes, she met with dillion who was the only one who saw her curse as a gift from the gods and he told her that he can help her to understand the world. After Senua’s father kills her mother (Galena) she runs away from home into the wilds. While she is in the wilds, Vikings have attacked her home and they kill everyone and burn everything. When Senua returns from the wild she finds Dillion and here fathers corpse (we can see the dads’ burnt body in the house).
We start the game right after that Senua returns home and finds everyone killed. The voices in her head are blaming her because she wasn’t there when they needed her. Senua starts her journey to Helheim (hell) which symbolizes her home, the rot in her hand symbolizes the mental illness that she suffers in and Hela symbolizes her father. Close to the end, Senua starts to realize that there is no darkness (the “curse” kind of darkness that her father talked about), and if it’s all a lie then there is no point to this quest anymore.
In the end she concedes that the death of Dillion is not her fault and this is why she let the skull fall down.
At the end of the game Senua says:
-“This is where my story once began. And so it has to end here”.
The house where we are in the end is their house and we can see her fathers corpse.
The whole game was in Senua’s head.
As Dillion said “The hardest battles are fought in the mind”.

Unsatisfied with the pseudo-educational reviews on YouTube? This site will elevate the schemes, plots and manipulation you undergo daily. Making YOU more aware and sophisticated in your approach to cinema, videogames and media in general. View all posts by Shut-Eye Cinema